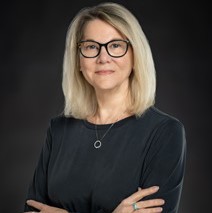 Nancy Wolff, Ph.D., an economist and distinguished professor, joined the Bloustein faculty in 1992, and became Director of the Bloustein Center for Survey Research in 2015. Her research has increasingly focused on public policies and justice practices that influence the incarceration and rehabilitation of justice-involved people. In 1999, she was awarded an Atlantic Public Policy Fellowship to study the management of mentally disordered offenders in the United Kingdom, and in 2002 she received funding from the National Institute on Mental Health (NIMH) to launch a national center on behavioral health services and criminal justice research. Her research has explored the prevalence of trauma among incarcerated men and women and the effectiveness of computerized-screening and treatment for post-traumatic stress disorder and addiction problems among incarcerated men and women. She is also an expert in costing methodology, and has conducted a number of quasi-experimental and randomized controlled trial studies evaluating effectiveness and cost-effectiveness of public policies and interventions. She is the author of over 100 peer-reviewed articles and chapters, and has received funding from the NIMH, National Institute on Drug Abuse (NIDA), the National Institute of Justice, as well as private foundations. She is the former editor of Journal of Offender Rehabilitation and associate editor of Justice Quarterly, and is currently an associate editor of the American Journal of Orthopsychiatry.

In 2007, she implemented two peer-run Community Centers at the women’s prison that provide assistance to over 200 women each month. Dr. Wolff spends three days a week in New Jersey and Pennsylvania prisons teaching, working with residents, and leading yoga, aerobics, and mindfulness programs. She is the founder of Books Behind Bars, a prison-based literacy program, for which she received a Russell Berrie Award for Making a Difference in 2008. Based on her work inside prisons, she was a semi-finalist for the Everyday Hero Award sponsored by the American Federation Teachers in 2012 and received the prestigious Rutgers College Class of ’62 Presidential Public Service Award in 2016.